What do dreams actually mean?

One question I’ve been asked a few times since my father died is whether or not I’ve dreamt about him. I hadn’t until last night. In this dream, he was detailing a set of small animals which I suspect he was planning to place in his model railroad layout. Weird, since my dad never really had a layout (his joy came from building – from scratch in many cases – the engines themselves) and when he finally did, it was a mine. Not exactly the ideal place for a baby fawn, but I digress.

Anyway, while he was fidgeting with these animals, I was running wire to set up the stereo in my mother’s new apartment, the one she’ll eventually occupy without him. He wasn’t helping (also strange, as in real life, he’d be setting up and I’d be helping), but he was complaining about the music (not strange, since he complained about everything). Even in my dream state I was thinking “why do you care, you’re not even really here…”

Finally, I turned to him and said “you’re not feeling very motivated right now, are you?” He looked me straight in the eyes, something he didn’t do often and said, “you know what, you’re right, I’m not.” And that was it. What the hell does that mean? 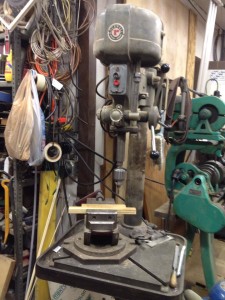 One of dad’s drill presses.

My dad could be maddeningly focused. I remember when he and my mom came to help Steve and I renovate our bathroom. We’d start working around 8 in the morning and keep going, working, working, working, all day to get the damn thing done. Every day for eight days. He was relentless.

But he could also stall on projects he didn’t care about, forever.

So why wasn’t he feeling very motivated in this case? Motivated about what? Getting my mother set up for her new life without him? And why, when I called him on it, did he admit he wasn’t? Was this about him, or is it about me?

My dad left a bit of a mess when he died. There’s a lot to clean up and I have to admit there’s a part of me that’s really annoyed at him about this. Leaving a garage full of tools nobody understands (some of them are complete enigmas) and a house full of half started projects, isn’t cool, especially when you’re dead. But how much do any of these things really matter? Everybody dies. Everybody leaves something behind that someone else has to deal with. That’s life. That’s death.

Then again, it could just be a dream.